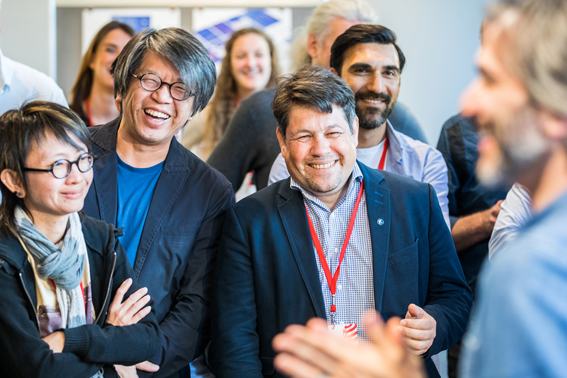 The Red Dot Award: Communication Design 2018 launched at the beginning of March. Since then, agencies and companies as well as experienced designers and up-and-coming talents from all over the globe have been entering their design and creative projects. All those who wish to submit their work and themselves to the scrutiny of the Red Dot Jury have until 15 June 2018 to register for the design competition. In a process spanning several days, 24 experts, including three new jury members, will decide which entries will receive the Red Dot labels.

Adjudication as teamwork
The Red Dot Jury is as international and diverse as the projects entered in the competition – and this is a basic prerequisite for discussing and assessing the entries individually and professionally. The jurors evaluate the works on site in teams of three, based on their specialist expertise. This takes the form of an adjudication process lasting several days, without preselection, which is based on various criteria such as aesthetics, originality, understandability, concept and implementation. The in-depth assessment and critical exchange between the experts allow for a well-founded decision.

New Red Dot jury members
The composition of the jury changes every year. Alongside experienced Red Dot jurors, new members are appointed to the panel of experts on a regular basis. In 2018, three new experts will bring their talents to the jury: Špela Čadež from Slovenia will contribute her expertise in moving images. Since 2008 she has worked as an independent animation director and as a producer. Her films are shown around the world and have won numerous awards. The jury’s know-how in the fields of UI and UX Design will be enhanced by Andrea Finke-Anlauff. She has already judged products as a Red Dot jury member, and now she will also assess the entries in communication design for the first time. She has won several awards with her company mangodesign, which focuses on product and interaction design.

Knut Maierhofer is also new to the jury. As the founder of KMS TEAM, he has extensive knowledge in the areas of brand strategy, design and
communication. Through his work, he creates visual systems that make the personalities of brands and companies tangible and relevant. Like all of the jury members, the new jurors will be bound by the Code of Honour, which dictates that they are not permitted to enter their own projects or projects in which they were involved in categories that they themselves will be judging. This is to prevent conflicts of interest.

Thilo von Debschitz made his début in 2017. The expert for communication design was full of enthusiasm: “There were two aspects of the judging that impressed me particularly. The first was its international nature. The international composition of the jury ensures that works from vastly different continents can be evaluated. Secondly I was very pleased to experience the positive atmosphere. All of the jury members treated the competition entries with great respect, and took lots of time for all of the works during judging. At the same time, the bar was set high for winning an award, with a general consensus that a Red Dot must reflect an excellent level”.

Multi-stage decision-making process
At the beginning of the jury session, the judges get an overview of the entries and clarify unresolved questions. The first step is to decide whether a piece of work can go forward or leaves the competition immediately. To receive a Red Dot in the next step, a project must get at least two of three jury votes. From these works that are awarded a Red Dot, in the third round the experts can select those projects that are worthy of a Red Dot: Best of the Best.

The final step is to award the Red Dot: Grand Prix in each category – but this is not obligatory. This highest individual award goes to the best piece of work in a category. In 2017, only five projects – 0.06% of all entries – won this award. This shows “that our jurors have very high standards”, says Professor Dr. Peter Zec, founder and CEO of the Red Dot Award, explaining the decisions of the experts resulting from their intensive discussions.

Red Dot Award: Communication Design 2018
From annual reports to online projects and from posters to packaging: In July, the jurors for the Red Dot Award: Communication Design 2018 will assess the design performance and creativity of all of the works submitted. Agencies, designers and companies wanting to have a chance to win the Red Dot can register their projects by 15 June at the latest and enter the competition for the globally sought-after awards.