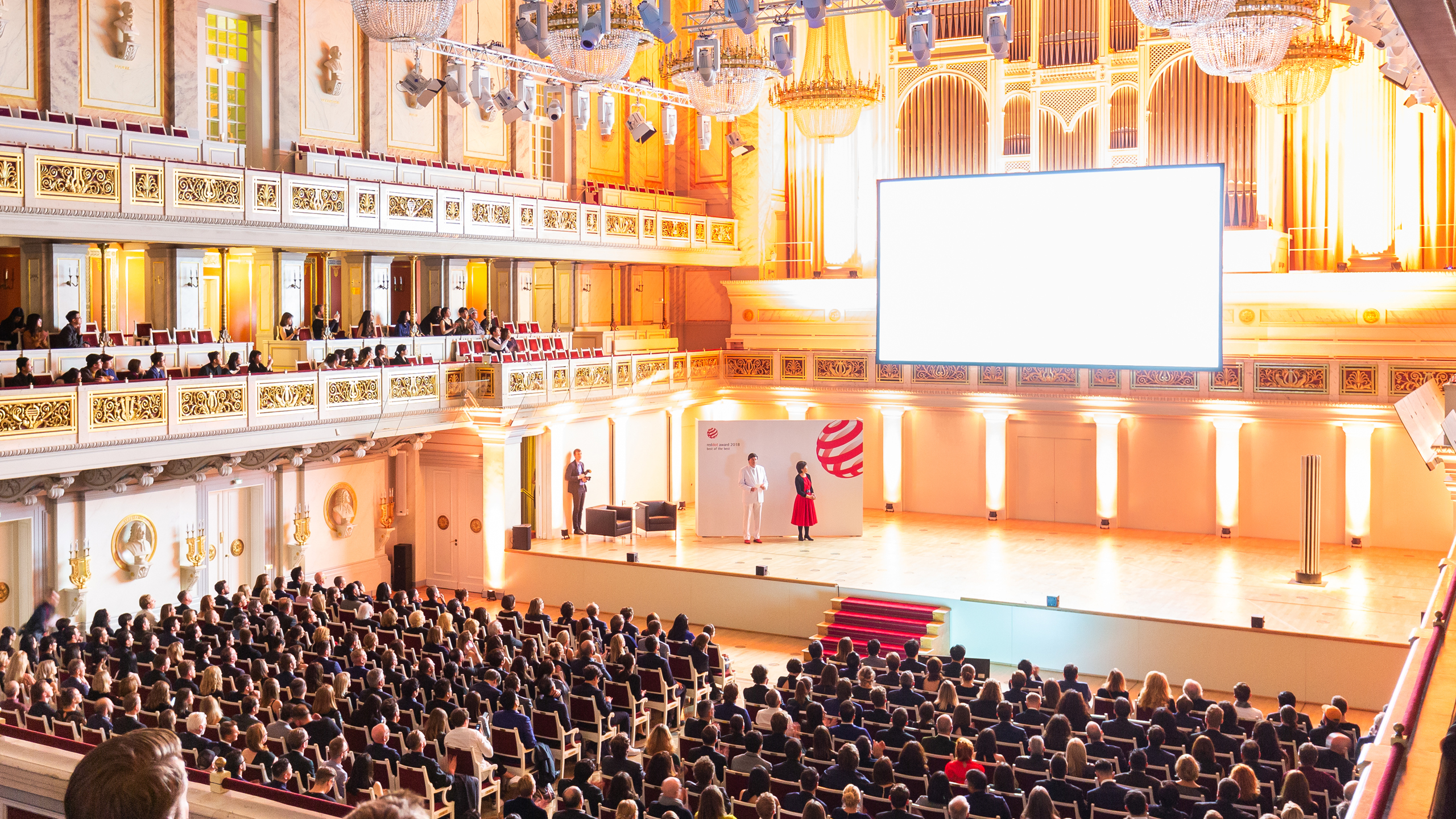 The evening of 26 October was dedicated entirely to award-winning creative achievements: During the glamorous award ceremony for the Red Dot Award: Communication Design 2018, the competition winners were celebrated in the Konzerthaus Berlin in Germany. Design professionals and talents, agency heads and company representatives from 40 countries accepted their deserved trophies before a full house. There were plenty of emotional and surprising moments, including in particular the awarding of seven “Red Dot: Grand Prix” awards, the newcomer’s prize and the title of honour “Red Dot: Agency of the Year”. At the subsequent Designers’ Night in ewerk Berlin, the laureates and the guests partied into the early hours and had a chance to see the design quality of the winning projects in the exhibition “Design on Stage”.

0.7% of the entries received the Red Dot: Best of the Best

Out of the 8,610 works entered by designers, agencies and companies, the 24 jury members selected the winners of the Red Dot Award: Communication Design 2018 during an adjudication process that lasted several days. Only 0.7% of all entries were given a Red Dot: Best of the Best for excellent design quality and creative performance. Before around 1,400 international guests, the proud designers behind the 58 best works accepted their Red Dot Trophies in person from jurors Jennifer Tsai from Taiwan, Damon Aval from Germany and Professor Dr. Seung Hun Yoo from South Korea.

The names of those who would take home a Red Dot: Grand Prix were kept strictly secret until the very last moment. The highest individual distinction in the competition can be awarded to especially outstanding works, the best in each category, at the discretion of the jurors. Seven communication design projects won over the experts with their exceptional design quality and creativity in 2018.

These include the corporate design “Forza Football”, which Kazakoff Design from Stockholm created for the football app Forza Football. Another winner of a Red Dot: Grand Prix was Banda Agency from Kiev for the brand design “OKKO” by the Ukrainian chain of service stations of the same name. The online film “Everyone is equal. No one is more equal.” by thjnk Zurich, created for Pro Infirmis, a specialist organisation for people with disabilities, was a big hit with the experts thanks to its design quality. Another Red Dot: Grand Prix went to the packaging design “ed’o Olive Oil – DELUXE Pairing Edition”. The design stems from Taller Design in Gothenburg and Mediactiu in Barcelona for Spanish gourmet food trader Selective Export.

The online platform “zeitzeugen-portal.de Erzählen. Erinnern. Entdecken.” (“Contemporary Witness Portal”) also got the sought-after award, which went to Markwald Neusitzer Identity from Frankfurt and Düsseldorf and to the Bonn-based Haus der Geschichte der Bundesrepublik Deutschland Foundation. The book “Unter den Brücken” (“Beneath the Bridges”) by the Austrian Atelier Oczlon also stood out from among the entries to garner a Red Dot: Grand Prix. The typeface “Le Murmure” by and for Parisian agency Murmure also emerged as the best piece of work in the “Typography” category.

The best project by an up-and-coming designer was recognised with the Red Dot: Junior Prize. In 2018, the award and the prize money of 10,000 Euros went to the coffee-table book “HABITAT – Vom Mensch geprägte Lebensräume” by Tom Hegen. The photo book shows how humans change their natural habitats and visualises these changes in aerial photographs supplemented with relevant facts and infographics. “HABITAT” thus invites the observer to discover his or her environment from a different perspective. The jury praised the impressive photography and the powerful concept.

Hyundai Motor Company celebrated as brand of the year

Hyundai Motor Company had lots to be happy about, namely its four Red Dots and three “Red Dot: Best of the Best” awards along with the title of honour “Red Dot: Brand of the Year 2018”. The South Korean automobile manufacturer earned the trophy for brand of the year with its magnificent design quality and creative strength. Red Dot CEO Professor Dr. Peter Zec, who was the host for the evening, awarded the trophy to Wonhong Cho, Chief Marketing Officer and Executive Vice President of Hyundai Motor Company, who was delighted to receive the sought-after honorary title.

Banda Agency from Ukraine is agency of the year

The excitement was guaranteed right to the end, as the evening culminated in the announcement of the winner of agency of the year. Banda Agency from Ukraine is the Red Dot: Agency of the Year 2018. The entire team surrounding founders Pavel Vrzhesch, Creative Director, Egor Petrov, Head of Art, and Yaroslav Serdyuk, Strategy Director, were ecstatic to be given the sought-after title of honour. As a symbol of their success, 2017 title holder thjnk handed over the “Stylus” trophy to the Red Dot: Agency of the Year 2018, who then proudly raised the trophy in the air. Six Red Dots and one Red Dot: Grand Prix bear testimony to the design quality and creative know-how of the full service agency. Whether online or offline, Banda Agency designs unexpected creative solutions that focus first and foremost on the efficiency of the communication and help brands to stand out from the generic advertising ‘white noise’.

After the Red Dot Gala, the international design scene moved on to ewerk Berlin. At the Designers’ Night, the Red Dot winners received their certificates and raised a glass to toast the year’s success stories. Together with the other laureates, agency heads and company representatives, including from Cheil, Mutabor, Strichpunkt, Festo, Philips and Siemens, they celebrated well into the small hours. The special highlight of the party in the trendy Berlin event location was the winners exhibition “Design on Stage”. Here the guests had a chance to inspect the outstanding, award-winning design quality of the current winning projects. From 28 October 2018 to 13 January 2019, a selection of the best works of the year will be on show in the Museum for Communication Berlin – in the studio exhibition “Best Communication Design – Red Dot Winners Selection 2018”.