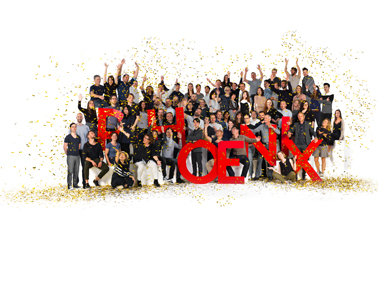 This year’s title of honour “Red Dot: Design Team of the Year” goes to Phoenix Design with its teams in Stuttgart, Munich and Shanghai. Founded in 1987 by Andreas Haug and Tom Schönherr, the interdisciplinary team with its international gearing has been especially convincing with its consistently innovative, top-notch design achievements. On 9 July 2018, the Phoenix Design Team will be officially awarded the title at the Red Dot Gala and will receive the “Radius” trophy on stage at Essen’s Aalto-Theater.

“Phoenix is revolutionising the product design discipline. With a new understanding of the ability of products to interact, the team is creating real brand experiences and winning over not just the Red Dot Jury, but also me personally. I want to congratulate the winners very sincerely on their well-deserved success”, said Professor Dr. Peter Zec, founder and CEO of the Red Dot Award, in regard to the Red Dot: Design Team of the Year 2018.

Tom Schönherr and Andreas Haug, Managing Partners and founders of the design studio, are delighted to receive the individual award, which no company or designer can apply for: “For the whole Phoenix Design Team, the title of honour ‘Red Dot: Design Team of the Year’ is hugely significant, and is due primarily to the employees who have created the success of Phoenix Design over several decades. It is the highest award in the international design world for an outstanding team performance over decades. Everyone is absolutely delighted.”

FIRST. NOW. NEXT. – Without a past there is no future
The Phoenix Design Team designs products for the future. Following the motto “Without a past there is no future”, the team benefits from its many years of experience. The history of the design studio began in 1987 with the dream of making the world just a little bit better. It was on a yacht in the Caribbean that Andreas Haug and Tom Schönherr decided to set up their own agency. In that moment, they did not dare to hope that they were laying the foundations for one of the most successful companies in the industry.

With its philosophy, “Logic, moral and magic”, Phoenix Design became a ground-breaker for German brand and design history. Nowadays, the studio creates products and services with roughly 75 employees at three locations: in Stuttgart, Munich and Shanghai. The designs are all geared to the needs of the user and to a self-explanatory interaction with the product, and are characterised by longevity and measurable economic success. They succeed in breathing life into the identity of the customer’s brand in a moving way.

Phoenix Design creates designs for tomorrow’s world. With new disciplines and methods, the designers uncover opportunities and work together with their clients, which include Duravit, Hansgrohe, Loewe, Haier, Huawei, Trumpf, Viessmann, Vorwerk and Zeiss, to design a new and better future. With the “Care-O-bot 4”, designed by Phoenix and manufactured by the Fraunhofer IPA and Schunk, the design team has impressively demonstrated that it sets standards for the future. The service robot features sophisticated expressions and gestures. It can navigate independently, recognise obstacles and grasp objects unaided. The jury for the Red Dot Award recognised this outstanding accomplishment in 2015 with the Red Dot: Best of the Best.

Award ceremony and exhibition launch on 9 July
At the Red Dot Gala on 9 July, the Phoenix Design Team will be officially announced as Red Dot: Design Team of the Year 2018. It will thus enter the Hall of Fame of international design, joining the ranks of Apple, adidas, LG Electronics, Porsche, Grohe, Veryday, Bosch, Blackmagic and Canyon. The special exhibition designed by Phoenix “PHOENIX – First. Now. Next.” will open on the same day. It can be seen alongside the exhibition “Design on Stage – Winners Red Dot Award: Product Design 2018”, which showcases all of the award winners in this year’s competition, until 19 August 2018 in the Red Dot Design Museum Essen.

» Further information is available at www.red-dot.org/pd